This lesson was taught to a bright and vibrant child with some slight challenges in hearing and speech. 5 years old. Fine motor skills undeveloped. Cannot draw or write (YET). He had class after his brother and I made sure that we did not put the blocks away before the new lesson. Therefore his first task was put away blocks. I then made him use alternating hands to put the blocks in the tray, he could not pick up a block with the same hand twice in a row, thus engaging more of his brain and making it more FUN. He showed me each hand before he grabbed the block he wanted and I nodded and smiled each time giving him positive reinforcement.

Then we made a house with walls that were 10, 9, 8, and seven and eight high (this is not the exact one but you get the idea, this picture shows one a little more advanced with addends past ten.): Then we counted on our fingers. Two fingers on this hand three on the other: how many?

Example: 5 + 3 = 8
He always counted starting at one, even if he knew one hand was 5 and the other 3. He started 1, 2, 3, 4, 5 and then 6, 7, 8. They have to be taught to start at FIVE and then count 6, 7, 8. this takes patience and practice because they always want to start at one just to be sure. We are counting on our fingers now because one day soon we will NOT be counting on our fingers. Fingers are a crutch we will ween off of shortly. Like training wheels on your bike, we won't need them once we get going and it will actually hamper you once you want to go fast and do tricks. We will know these facts "by heart" and the child will know all 45 addends by heart too. He had fun making up his own problems for me to count, part of the fun was getting his fingers to do what he wanted them to do. We then counted to 20 by fives using all our hands...we did this several times.


Many students come to me with an F in algebra and can't add 7 + 8 without either counting on their fingers (as seripticiously as possible) or stopping to think about it. Multiplying 7 x 8 also gives them pause. Fractions poorly understood...gee how come they don't get algebra? But I digress.

Then just for fun we built 3's and 4's because it's super easy, fun and quit because an hour had gone by. Note we never once used paper and pencil or even a white board.
Posted by Crewton Ramone's Blog Of Math at 12:17 PM No comments:

Been busy. Have done hours of tutoring since my last post.

Here is a description of what happened for one of of those hours.

First we built tens on down to two's.
Then we talked about subtraction, and with the blocks right there verbally drilled him on facts. 10 take away 4, 8 kids in the room, three leave how many left? Etc. Did 15 different facts and five that were the same. Did not relate subtraction and addition. In other words 10 - 4 = 6 Is exactly the same problem as 6 need what to be ten...when you have the blocks. He had the tray to look at the whole time. So it was easy. Soon he will only have symbols...but first he will be absolutely confortable with blocks and drawing.

Then we built rectangles and labeled the sides and hid the answers underneath. The over the shoulder shot show him labeling 5 eights... 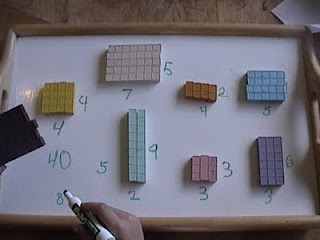 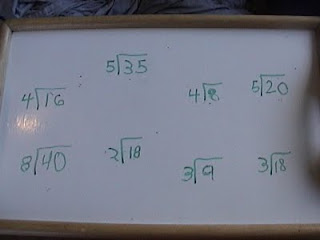 Then we talked about division and multiplication. Here we see symbols only and we have adjusted the symbols to fit the blocks the way we wanted. You don't see that we changed the sevens to show five across 7 down and used 5's because 5 is contained in 35, seven times. We also talked about how to read that expression...4 IS CONTAINED IN 16 four times. He could see that, it was visually obvious. 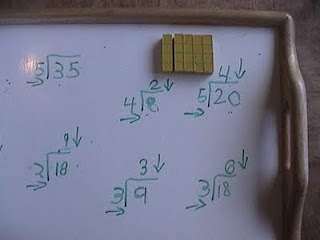 We then added the arrows for the pattern across and down. and as you can see he got the blocks out to help him. All he had to do was count the down he already knew the one side and how many in the rectangle, I thought he would get out 5's but he got out 4's because he knew the answer. That problem says build 20 with fives. He was in a situation where he could not fail. So he was confident. The important part was he got it right and understood that he had to count the other side. He also understood 4 is contained in 20 five times. Multiplication and division all at once. They are inverse functions after all.

Then we moved on to his favorite topic: ALGEBRA! We moved on to cross teaching or compound teaching concepts. The first "problem" was make as many rectangles as you can with x2+ 7x... 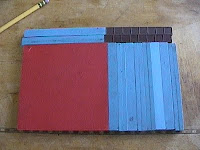 Then we added 3 more x. It was a tiny problem how many more x do we need? We had 7x so we needed 3x to make 10x. Algebra is easy! Now we made as many rectangles as we could with
x2+ 10x

The we continued building the addends to 18...

Then the hour was up. 60 minutes flew by.
Posted by Crewton Ramone's Blog Of Math at 9:49 AM No comments:

Posted by Crewton Ramone's Blog Of Math at 9:23 PM No comments: 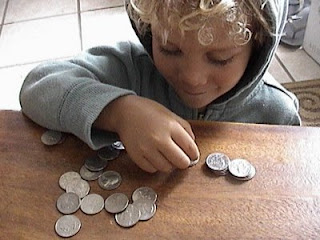 Today we did some simple sorting and counting with a bag of change. The wee ones learned the names of the coins using a three period lesson, although they will need more reinforcement, for the next few hours they have the names of the coins down. Again, it's not about storage, it's about retrieval and building the pathways to the information that is contained in the mind. It has taken us a long time to figure out the mind is not contained in the head, although the brain is. The brain is simply our interface with the mind.

The oldest one still occasionally confuses nickles and quarters...stacking them requires fine motor skills...and gives us a chance to count by fours...we glossed over the equivalency of the coins, that wasn't the focus of the lesson. All we were doing was counting and sorting. Later we will listen to multiplication rock songs...and sing about fours and fives...

In the picture we have sorted out the quarters and are stacking them, later he will be able to ask questions like why do we stack them in fours but dines in fives and pennies in fives and even nickles in fives?

There are a ton of things you can do to play with math concepts everyday... 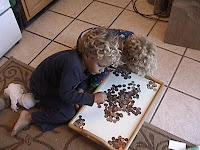 Posted by Crewton Ramone's Blog Of Math at 1:26 PM No comments:

Well, so far today with the wee ones

First we did a quick math lesson on same. I just brought a tiny white board into bed. Often we watch Multiplication Rock vids...but today we did this instead.

They love erasing same on both sides.

The could easily see same because I had color pens, the x's are blue lines, the units green dots.

So they erased same on both sides

We talked about HERO ZERO! (2x - 2x) older students hear hero zero no fun get back to one repeatedly.


This took a lot of counting and thinking for the 4 year old using his fingers to take away 2 from three 2 from 2 and 2 from 5 BUT ALL WE DID WAS COUNT and understand the CONCEPT of same.


This is what the white board looked like when we were done: 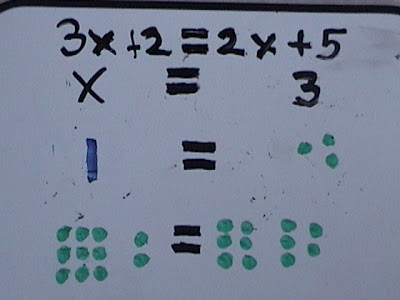 This is even clearer with the right manipulatives...

we read "Ten Apples Up on Top". We counted the apples just about every way possible including skip counting and counting by tens...

Then we read The Popcorn Dragon which has no math in it at all...

As I type this they are watching PBS Kids...

http://www.crewtonramoneshouseofmath.com/
Posted by Crewton Ramone's Blog Of Math at 8:29 AM 2 comments:

I expect this blog will chronicle my adventures in building the Crewton Ranone Math Wild Thing. It will also chronicle class by class some of my students so you can see what happens in an hour. Or during "math time" (which can be anytime) in the case of the toddlers. It's not magic and it's not that I'm such a great teacher; it's that I have great tools and that I have a great methodology.

Posted by Crewton Ramone's Blog Of Math at 3:48 AM No comments: