Playing with square numbers can lead a lot of places. 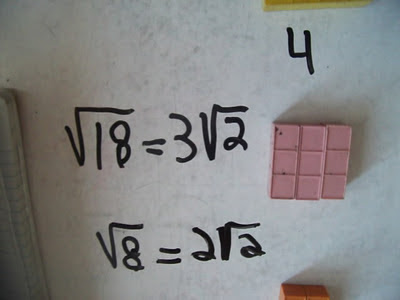 You can end up doing square roots, or distance formula or Pythagorean Theorem...or in this case we ended playing with radicals. You could also start playing with completing the square or finding the difference of two squares...all of these concepts are centered around squares, although some math text books and therefore some math teachers seem to have forgotten this. Really it's about squares.

We have built square numbers before, but this time we ended up expressing numbers in terms of radicals.

We talked a little about why we call them radicals, used our imaginations to make a two into a square and played around with the ideas. I was under the mistaken impression that we had done this before but actually this was his first introduction to them, had I know that we might have used some clay to really conceptualize the fact that we were turning these numbers into squares. I have quite a bit of video and pages and posts devoted to this topic. This should be a clue as to its import.

The sad thing is that it is SO EASY and yet so many kids come to me frustrated and unable to do what their classes require...because they are confused with rules and process. Like factoring polynomials once they see how easy expressing numbers as a radical is they actually get mad. All we are doing is playing around with squares. After a few lessons like this when they see the way it is presented in school and it makes sense...the symbols and lessons are just short hand as it were, for making squares and applying them to mathematics.

The nice thing with this student is he will never know it's supposed to be hard...in fact a lot of times he makes it harder than it is because ever since he got bumped up to Honors Math he tends to over think things...and do whatever it is the hardest way possible.

The second part of this video takes it up a notch replete with some Jazz and blender sounds in the back ground. Eventually this will be on a password protected page...and I really should make a PDF or two...


Posted by Crewton Ramone's Blog Of Math at 7:52 PM