This video is pretty self explanatory, so I won't put too much here in the way of words. People don't read these posts much anyway just look at the pictures and watch the videos...so:


But for those interested in a little more in the way of training for parents or teaches, with little kids you don't need to write symbols to start.  (By little kids I mean 6 and under.) Just do what you see here and talk about it. Later the symbols will make sense when we write them. Don't forget to spend some time DRAWING them too.  (Look at the second excerpt for more on this on the training entry page.)  Lastly, do symbols...but this kid is 17 so we went directly from manipulatives to symbols...because he's paying by the hour and it takes too long to draw and label them although it is a very worthwhile step, I told him to do it at home. I had other things I wanted to do in the hour. The idea is to teach concepts but this child needs work on multiplication...multiplication will make all of his math easier to understand because there is no time lost on computation (if multiplication is easy and fast, if not the math problem is compounded because they have to think about multiplication AND whatever the problem is too...once they have the multiplication down as Forest would say, "that's one less thing." 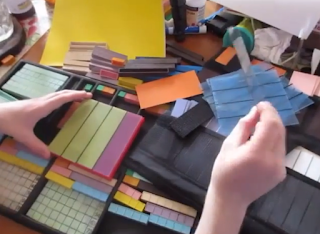 Here again I want to drive home the point that all we are doing is counting and basically I am teaching him to count and count quickly using fractions manipulatives. Counting quickly like this is called multiplication. The fractions are also discovered...and equivalent fractions understood and reducing fractions will not be difficult when we introduce that concept later...only then we will be using division instead of multiplication. I hope you can see the rectangles... 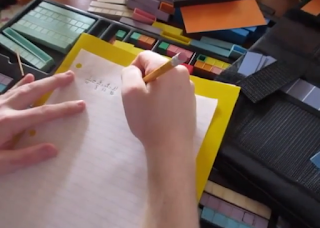 Introduce skip counting early and sing songs and play and this whole problem can be avoided...too many teen-agers have this exact same problem, they are having trouble with math (particularly algebra) because they can't even multiply and having a calculator doesn't help. In order to see relationships, ratios and multiples it is imperative that they know their multiplication tables bare ass minimum out to 9x9, out to 12x12 better than that and out to 20x20 (yes, 400 facts) best of all. We went thru a little period there where well meaning but horribly misguided math teachers tried to say that with the advent of cheap calculators students didn't need to know multiplication by rote memory. OPPS.

They were trying to spare students the pain of memorization and drill. I agree about taking the pain out of mathematics but not with taking the learning of multiplication out of the mathematics, which is why we didn't spend the whole hour on this...I assure you drill, worksheets, and flash cards will turn the kids off faster than you can say "modern mathematics teaching in America is an utter failure." But if you play games, sing songs, skip count, and do fun math activities starting at an EARLY AGE, multiplication can be mastered without tears, muss or fuss.

I have a book (my Curious Counter's Compendium) you can get for practically NO MONEY that will help you start teaching math to your toddlers, and another one (my Subtraction Manual) you can get for NO MONEY at all.  More manuals are being worked on as we speak, there will one day be 11 in all.

Side note: We measured the distance he walks using the odometer on my car and it was just over two and a half miles, one way. Math is either important or it isn't.


Posted by Crewton Ramone's Blog Of Math at 5:44 PM