Time Flies When Your Having Math

2 weeks since my last blog post. What a lot of math has transpired in that time. I have managed to add some students and lose some students. Have started doing some work with a local school here doing math before and after school in short half hour segments.


Teaching math today, all day. In my first class a seven year old had a secret he wanted to tell me. I said tell me your secret later lets do math. All through the class he kept telling me he wasn't going to tell me his secret...I kept telling him it was fine I didn't want to know his secret, I wanted to do math. (counting by threes at this point).
At last he couldn't stand it anymore. "I'm gonna tell you my secret."
"Ok"
"You are never alone," he half whispers. "The earth talks to you. The earth talks to you, so you are never alone."
"Really?"... Read More
"Really. Does that make you happy?"
"Yes."
"Good: it should."
Back to math...

Another class with the younger students...the child in this picture is 4. He can tell you the quadratic formula if you ask him, and he can tell you how many 4's in 32. 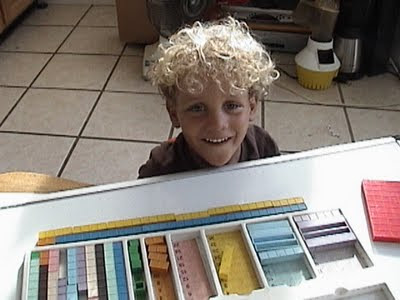 All we are doing is counting and comparing. He can see quite easily that there are eight 4s in 32. He doesn't even have to count by fours although he can thanks to multiplication rock and the Mortensen Skip Count songs...before we did 32, we did 12, and 20. The word "division" didn't even come up...we can introduce that concept later.

The three year old who has motor skills that are not as refined as his brother's had his own blocks to measure...he was counting how many 3's were in 12 at the same time as his brother was measuring 32. They had been working together but then they each got their own "problem" to solve. He was happy to report that there really are four threes in 12. And that four 3s is the same as 12. 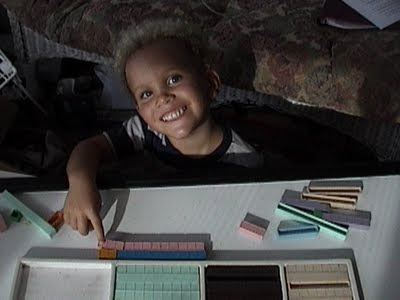 Note how I have the blocks pushed up against the tray so they can't get away from him as he lines them up: put the child in a situation where they can not fail.

Now they can take the blocks and build towers with them...this requires motor skills and as they build I ask how many blocks they have AND how many they have. In other words we count three blocks and that's the same as 12 since he is using 4s. 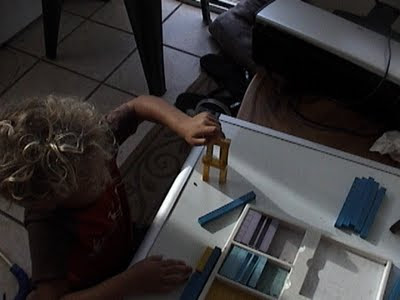 The towers fall over several times but it's no big deal, we just build it and count it again. In this case we are only using the blocks we measured with... 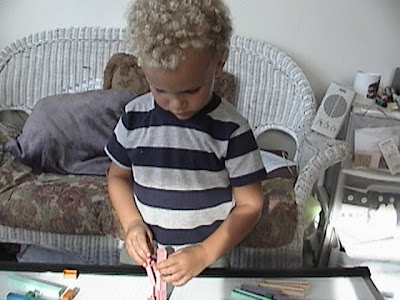 So the three year old only has to stack a few blocks, he measured 15 next and then built his tower. He only had five blocks to deal with. The look of satisfaction on his face when he got then to stay after he let go of them was priceless.
All at once we develop self esteem, fine motor skills, counting, and multiplication and set up for future division concepts all in one easy lesson.
Posted by Crewton Ramone's Blog Of Math at 11:51 AM 2 comments:

One child three the other four. Watching the same PBS' Dragon Tales episode for the tenth time...

"I don't wanna watch this show again and this is a benign dictatorship not a democracy."

I'd have pictures but they were butt naked and I have been getting a ration for posting pics of naked math students even though they are under 5...sick world we live in, but I digress.

I got out a ten and a two. Laid them lengthwise and said measure that with fours...the older boy gets out the blocks and carefully lays them along side.

Laughs when he lines them up and counts them..."four!" He says triumphantly. But then he sees I am not approving.

Self correcting, no "no" in the lesson. We are about to put away the ten and two but the three year old exclaims "I want to count it!!!"

He counts the fours and agrees there are three there. Three 4s is the same as a ten and a two. Next, I got out a two tens and a four...measure with sixes. They got out sixes and lined them up next to the tens and four...

This takes some motor skills and the 3 year old was happy to let his brother line them up nicely while he got out the blocks. They counted. "Four!!!"

"Very good. Four 6s is exactly the same as two tens and four."

"And two sixs is 12!!!" He says after comparing the two sixes to the two tens and seeing that he used up a ten and two of the units on the next ten.

Okay lets build tens...they each got their on ten section of the top tray and I made the older one build his own but set up the blocks for the younger one where all he had to do was match the right block to complete the ten.

Then we got on the computer and built nines and tens...they had fun and I didn't have to watch re-runs. I was using the Freeware version, so it had nines and tens, there are links on this page to a demo that only builds tens too...the software is about to get a slight upgrade where every time you get it right you get some audio reinforcement too. For now YOU can provide it for them, and never say no that's not right, if they get it wrong they are just getting more information so you can say, "try again" or "too much", or needs to be bigger or what have you.


Posted by Crewton Ramone's Blog Of Math at 6:43 AM No comments:

Continuing Down The Algebra Path 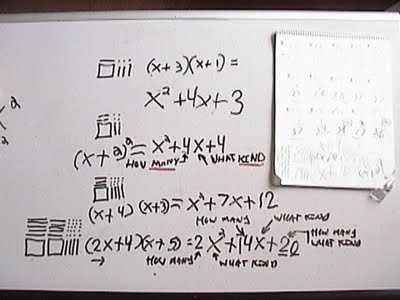 Again this work was done by a 7 year old. The first two are familiar to him he did them with ease and the third one was new ad he had to do it all be himself. Zero help from me.

Then we went into a lesson about concept number two: the highest number we count to is NINE, we only count SAME kind, and the numbers just tell you how many; the places tell you what kind, in algebra the symbols (x, y, x2 etc.) tell you what kind the numbers tell you how many and again we can only count same kind. This also applies to fractions. Understanding the five concepts and making sure they understand how they relate to each part of the math is crucial. 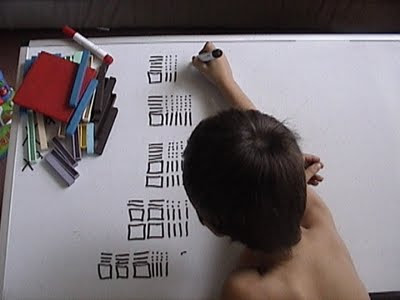 Now that we understand where we are and where we are going and why, a set of problems arranged by degree of difficulty is given. The point of this lesson is to go from drawing to symbols so that they can eventually go from symbols to drawing with ease. We want them to go back and forth easily. They have the ability to do this because the only skill they really need is the ability to count. Then we can re-inforce addends, simple multiplication, factoring and lastly factoring trinomials. 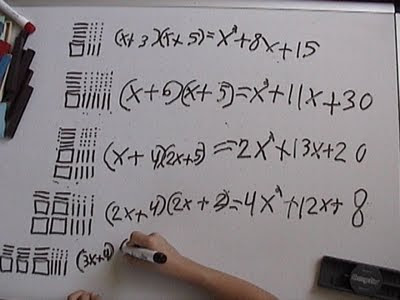 Right now this child is getting comfortable with trinomials and when we move on to explain the distributive theory of multiplication as it applies to two binomials, it's going to be simple and OBVIOUS. Right now we are "just counting".

Earlier in the lesson we built all the addends to 18, and practiced the patterns for multiplication for 2, 3, 4 and 5 by counting as we built towers using the same blocks. 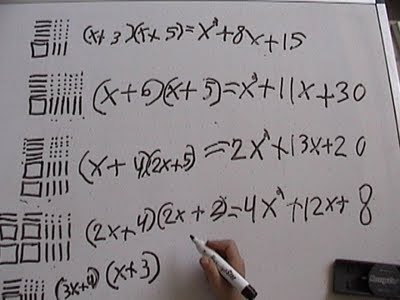 Again the time flew by and best of all we had FUN.

Tutoring in the Language of Math

Math is fun. Or it can be if you do it right. Here is a 10 year old who orginally thought math "Sucked." Now he's trying to get me to get his Grandma to pay for lessons twice a week instead of just once a week. Imagine that.

In this lesson we fooled around with subtraction, addends, and algebra. All in one lesson, with simple easy transitions to each. 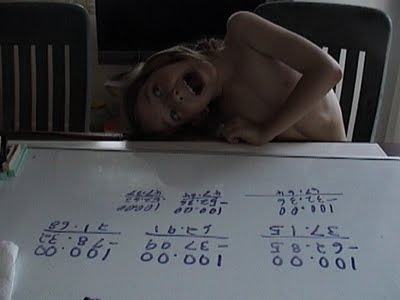 Go to my website for a lesson on subtraction. The page is not anywhere near finnished yet but it will give you more..find your way to my Myspace blog too. 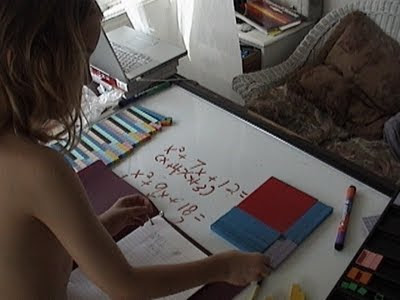 Here we go directly into algebra, but you can see we were building the addends past ten, and that oddly enough since math is a language it all goes together and makes SENSE. The algebra he was doing was to cement the work he just did with addends AND to teach factoring...because factoring trinomials is just the clever use of addends and multiplication. An hour went by INSTANTLY. He was quite literally shocked when he realized it was time to go...

Follow the advice of P.T. Barnum "Always leave them wanting more..."
Posted by Crewton Ramone's Blog Of Math at 11:03 AM No comments:

Little boys up early, they can watch TV or you can go to my site and watch Multiplication Rock and then watch TV...the 3 year old can sing along to several songs now...beats the heck out of a lot of the stuff that's out there.

Multiplication just allows us to count fast. This will be useful later so we don't get lost in computation when we are doing story problems or so called "higher math" and such.

The lesson lasted about 18 min...6 songs. Got out blocks as we sang...for "I got six" got out sixes...showed 3 sixes is a ten and an eight right along to the song...handed the three year old fours as we sang about 4's...

It's not rocket science. Repetition...breeds speed and skill. They listen to Crazy Frog a hundred times a week why not help them listen to math...instead of or in addition to...?
Posted by Crewton Ramone's Blog Of Math at 8:52 AM No comments: