Here are some videos I've made covering those Perennial Algebra Problems...the ones you'll find in every Algebra Text Book or course.

These "exercises" are supposed to teach you about fog, substitution/evaluation and how to express one thing in terms of another. Instead of f(x) for the function they want f(h)...in order to do that you have to put x in terms of h.

In this case you have to figure out that x = h/2 and you have to know how to find the area of a triangle...

It helps to understand rectangles and that all it is is A = (1/2)LW but instead of Length and Width we are talking about Base and Height so we get A = (1/2)bh and all we have is a special triangle that is 30-60-90 so the base is h/2 and the (√3)(h/2) or vise versa depending on how you look at your triangle. So then all you do is substitute terms and you're done. Somehow they usually don't make it that easy. 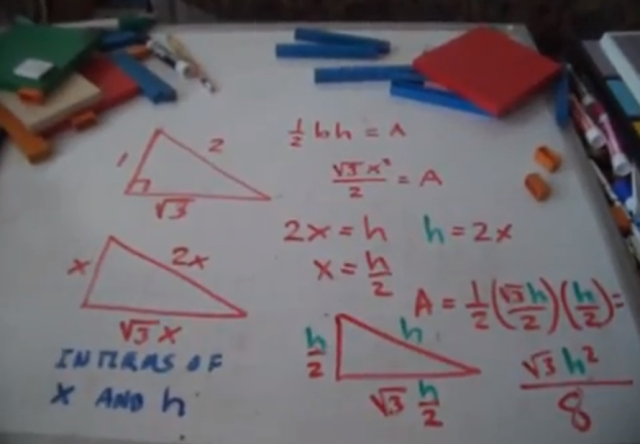 
Crewton Ramone Express Hypotenuse In Terms Of Perimeter of a Triangle.

Explaining via Mortensen Math...this is basically the same as this vid except I explain it with the emphasis for teachers and trainers who are using the Mortensen method...here is regular explanation: http://youtu.be/7NvnLPwkZVw

In this vid I talk about the concepts of Hero Zero and No Fun Get Back To One as well as the rectangle and SAME.

I left out the concept of the rectangle and squares...and that

Important concepts to understand here. They stumble in exactly the same places high school and college kids do...but by the time they are teens these concepts will be second nature.

It got cut off at the end, but basically I was explaining that I give him a hard time because he's my son...but that I was very pleased with his work today. And then they did their usual Crewton Ramone's house of math sign off...but the camera died. Happily the lesson was over so we didn't really lose anything...less than 30 seconds got cut off.

A note to those with dyslexic kids...what they "see" and the decoding going on there is usually more "powerful" than what they hear.

More videos and sample lessons you won't find anywhere else with these two are here:
http://www.crewtonramoneshouseofmath.com/Dboyz.html There are several hours worth of video there now. You need a password.

And last but not leaste a problem where we put Pythagoras to the test:

All of these problems can be fun if presented properly and if the students have a firm foundation in mathematical concepts. If not they tend to strike fear and cause confusion and delay to quote Thomas and Friends. Just remember rectangles are easy to count and triangles can be a bitch to count so we turn them into rectangles. We also do this with circles and areas under curves.

Be sure to find us on Facebook. And be sure to share this post with kids and teachers you know that are stuck in algebra class.

Posted by Crewton Ramone's Blog Of Math at 4:27 PM No comments:

Playing with blocks makes math easy and fun for little kids...and given the proper tools and games and activities "just playing" with blocks can teach quite a bit of math. In fact this is how the Mortensen Method was born. One of the plethora of fun games and activities in your arsenal should be building pyramids of blocks. Walls and towers are fun too...entire math towns can be built. These towns can teach addends or multiplication or combinations of these topics and MORE. 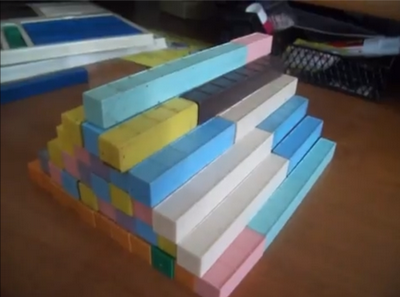 Playing and having fun with math is foreign to so many parents they are sure it can't be this easy. Actually it is. You have to direct a lot of the learning but over all you will see a lot of it can be self directed.

Here are a few of vids that focus on just this one activity: building pyramids. Starting with this short one where we made nines:

Here is a slightly longer vid where we made 12's:

And here is a longer sample lesson with a child that has a few cognitive challenges, but you can hear him catching on after a very short time. You won't find this vid because it is UNLISTED. You will also find it on the sample lessons page. 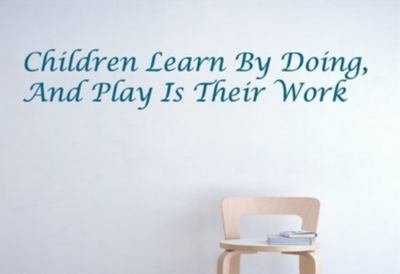 This is not a new concept:

"Do not…keep children to their studies by compulsion but by play."~Plato
Greek philosopher, 427–347 BC

"Man is most nearly himself when he achieves the seriousness of a child at play." ~Heraclitus, Greek philosopher 535–475 BC

"Whoever wants to understand much must play much." ~Gottfried Benn
German physician 1886–1956

"Play is the only way the highest intelligence of humankind can unfold." ~Joseph Chilton Pearce, Contemporary American scholar

"Play gives children a chance to practice what they are learning." ~Fred Rogers
American television personality, 1928–2003

"Children need the freedom and time to play. Play is not a luxury. Play is a necessity." ~Kay Redfield Jamison, Contemporary American professor of psychiatry

Now if you so are so foolish as to think that you are wiser and smarter than that partial list of people who understand how important play is, I am sorry for you. Play is not just for recess and math can indeed be taught through play. Further, children who learn this way are not confused when it comes time to take tests, because they actually understand the math the questions on these tests are easy and they usually score not just well but in the top percentile of their peers.

With the manipulatives they can actually SEE what they are doing. It's not like this is another way to do math it is a decoding of the symbols in such fashion that both the conscious and sub-conscious mind can understand and better yet it is presented through play.


Posted by Crewton Ramone's Blog Of Math at 8:32 PM No comments: