Here is a lesson that uses bases for practicing math.

This is again cross teaching or a compound lesson. I am not interested so much in the student memorizing what one number in base ten is in another base, I am interested in the student being able to grasp some basic concepts like numbers are made out of other numbers, a deeper understanding of place value, a deeper understanding of division concepts...how many times is a number contained in another number--that's basic division.

When we convert from base ten to another base like 2 or 3 IT'S FUN to do. Kids enjoy it if you present it correctly. 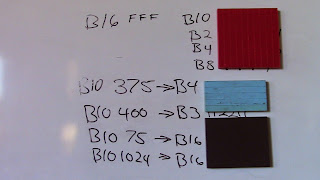 This blog post is just to give you some ideas. I'll add more video on this later...I made this video on a lark because a parent was having some trouble explaining division. Play with this a little bit and long division will be a snap. I have lots of other videos on long division and using algebra to teach not only division but the other basic operations as well.   Algebra is just generic math.

This video stops before we get to the repeating decimal. As I was doing this I was thinking too many concepts at a time. Keep it simple...next time we come back to this we can take it a step further and see what happens when we divide by sevens or nines...for not finding out how many time one number is contained in a another number with division should become much easier after converting to bases where you have to think about multiplication and subtraction with different numbers. For example converting 100 into base two...we don't need a 128,  but we do 1-64, 1-32, no 16's, no 8's one 4 and no 2's or 1's...so 1100100. When you are a little kid that's a lot of thinking. But it makes sense and they can see that what they are basically doing is adding 64 to 32 to 4 to get 100...and keeping track with symbols in certain places...that one in the middle of the zeros means one four. Converting it into base three or 4 is also FUN.

I didn't get hung up in the details of notation, but instead focused on focused on the basic concepts.  I assure you when they go do base ten or base x division it will be easier...and again doing division in base x makes "regular" long division easier too.  Repetition is the mother of skill and memory but that doesn't mean you repeat the same thing over and over again. We want them to learn the 45 addends and their multiplication tables....this exercise practices all of that. For the little kids stat out with base two and maybe later do some base three. Do a few easy ones and work your way up.

I often start with base two and then make a table...from x⁰ to x10 across the top (largest on the left to smallest on the right) and then going down the right hand side binary, 3 to 10, 12 and then 16. Just making the table is a great exercise...do as much as you can without a calculator. Then it's fun to punch a calculator and get the answers, unless you are interested in the students practicing the computation. You might want to do it in stages over several lessons so it doesn't get tedious.


Here are the answers...

This gave me an idea for a password protected page called "solutions." 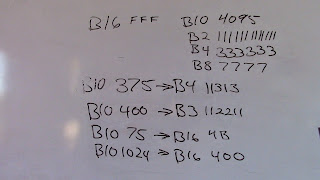 This post is mostly done, check back there may be more...Winter break is proving very challenging for getting things done....lol...
Posted by Crewton Ramone's Blog Of Math at 11:49 AM 1 comment: