Trigonometery For Little Kids with base ten blocks. 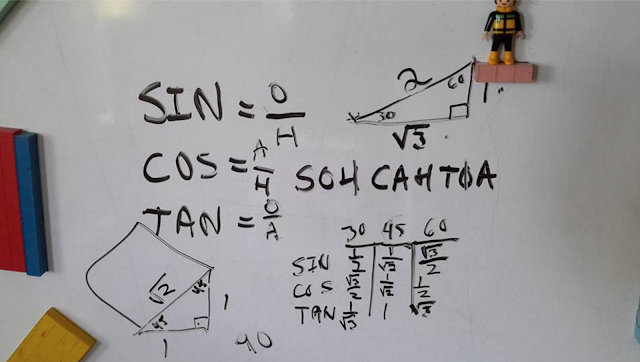 In this pic we see our little man looking from 60° so we can figure out the relationships and put them on the table.
Quick lesson on Trig. This was maybe 15 minutes of an hour lesson where we practiced addends, algebra, multiplication, subtraction, division and more. If it was a little kid we would have drawn a generic triangle and talked about SOH CAH TOA. And that would have been it.  See: How To Teach Trig To Eight Year Olds.

This child was 10, so we did a little more. Talked about two special triangles and made a little trig table, NOTE we did not rationalize the denominators, that will be another lesson. Baby steps. Concept 5: no fun get back to one...
One concept at a time. Keep the cognitive load LOW. Right now most important is understanding what SIN means, which is simply the relationship between the opposite side and the hippopotamus...but you need to understand the what the opposite side means and that it depends on where you are. But look at it as vocabulary. SIN COS AND TAN are words that have meaning and are the basis (along with
Pythagorean theorem) of trigonometry.
We talked about Pythagorean theorem (one or more lessons in and of itself), the fact that the angles add up o 180 another lesson in and of itself and a great way to practice some subtraction...subtract from 100, 100.00 and then subtract from 90 and 90.00.

I hope you can see how after a little bit of practice figuring out angles, where we subtract from 90 you could easily segue into subtraction or algebra lessons x + 60 = 90...as opposed to dumping it all on them all at once and then going into the unit circle...sin = y and cos = x?? What? Just memorize SIN30° = .5

We talked about that too...if all I did was memorize SIN30° = .5  and didn't even know that meant the relationship between the opposite side and the hypotenuse was one to two, trig is going to be hard and NO FUN...and no fun. And if I play on the unit circle without even having been exposed to basic concepts the cognitive load is too high, not to mention they probably aren't even trying to teach to my learning style, and I get an "F" and then I have self esteem problems...and $35 bucks a month is too much. OK.
There are a leaste SIX separate lessons here...all of which can be EASILY understood by a six year old if you keep the numbers small while explaining the concepts. Get a password. For $35 bucks a month for 10 months you can have these lessons and more FOR LIFE and AVOID the tears that typically come with math when they are teens...most people wait until their kids are 13 or 14 or even 15 and 16 and confused instead of avoiding the problem in the first place.
Posted by Crewton Ramone's Blog Of Math at 12:56 PM No comments: