A poem about the Unit Circle by Crewton Ramone. 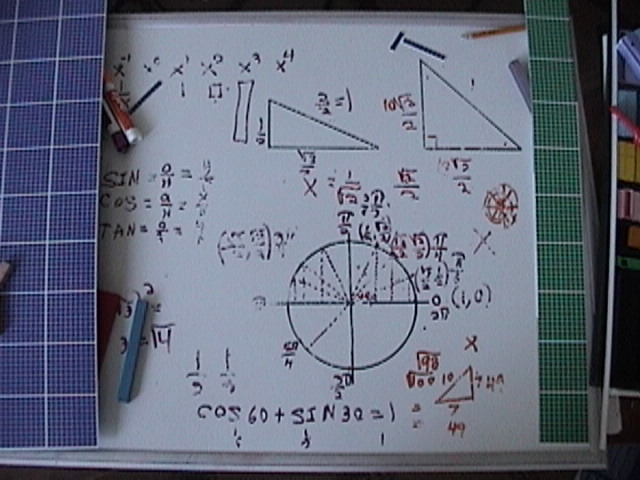 Six, four and three
Adding same kind is pretty EASY
Especially when you can see
1/6 equals 30 degrees
You count the 60's by three's and of course
The 45's are counted by fouths

Can you believe it makes some of your classmates cry
because they can't count by 1/6ths, 1/4ths or 1/3rds to 2pi ?
And somehow they fail to see
That 30 is just 90 divided by 3,
And 180 divided by 3 is 60
So OF COURSE 30 degrees is pi over 6
The misunderstanding was easy to fix
Since 90 is pi over two multiply by a third and you're through

And then we can start talking about sin cos and tan
Just chant soh cah toa like you're a cave man
When applied to the unit circle you get x, y, and r
But just memorizing this won't get you too far
If you draw the special triangles you just divide them by 2
Make the hypotenuse 1 it's easy to do

Then stick them in the circle and move them around
All you do is count the sides as by now you've certainly found
And just keep counting; you see the theory is sound
Math is just numbers and all we do with numbers is count
With this simple knowledge the unit circle is easy to surmount

Now we take the whole thing and roll it around the the coordinate plane
And you end up with these beautiful wave forms that make kids insane
The period is two pi, but now up and down we go
Just look at the wave forms and you will know
What happens at pi and one and zero

Understand the concepts and then all they can do
Is change the numbers around on you
And it won't matter because you can see
All it is, is counting by fractions of pi whose denominators are 2, 6, 4 or 3
You count to one twice because pi is 180

Two pi is 360 and you're done
And you barely need hero zero
Although you definitely need no fun get back to one
And you use the rectangle to organize thought
Pythagoras' squares get you out of tight spots
Once you understand what it means to be same
It turns out you thinking math was hard
Was really quite lame.

You speak English: that's hard
Math is so much easier in so many regards
Five simple concepts
You master in baby steps
And now you know what I say is true
By the time I'm done with you there won't be a damh thing you can't do.


Posted by Crewton Ramone's Blog Of Math at 11:09 PM No comments:

Here is another session with a bright ten year old. She has a favorite game already which is what's under the cup but we did a lot more than that... This post can be found on Emma's page with some full motion vids of previous sessions.

First we built towers with addends for ten, then we built towers of 3's and 5's and 4's and so on and then we laid them down and counted how many...and popped a bit of pop corn, which is when I remembered to get a camera out. 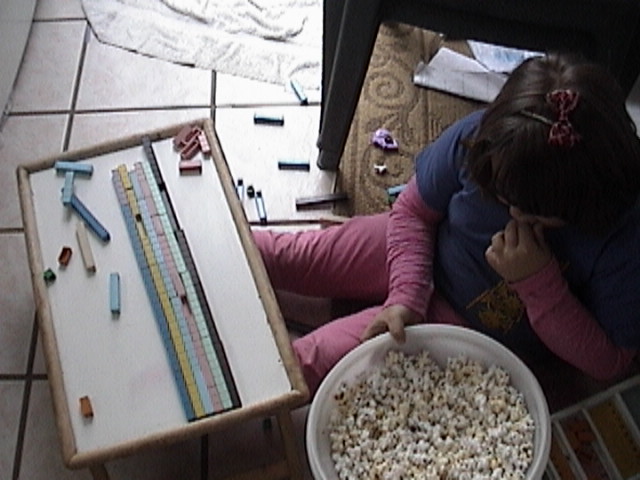 Math is fun with a bit of food...organic air popped pop corn with real butter and real coconut oil and a bit of pink salt and brewers yeast...healthy and good for her brain. Later we slacked our thirst with "vitamin c juice" (emergen-c)...

All we are doing is counting and comparing. 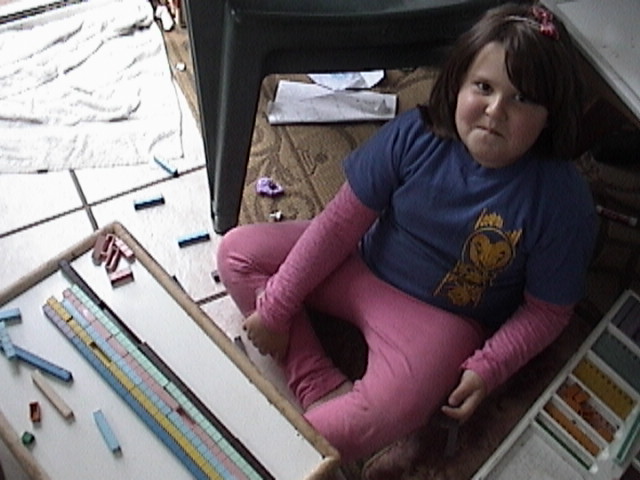 Fours, fives, threes, nines, eights...we compare them to 36 which is 3 tens and a six on top...count how many fours makes 36, note that 9 fours and 4 nines is the same...see that 5's don't make it into 36 evenly...you get 35 and one left over and that's 7 fives. We just talk about numbers count them and eat popcorn. This is math.

She points out a few things. I point out a lot of things, sometimes I point out something erroneous and see if she agrees...like two fours is the same as 9. 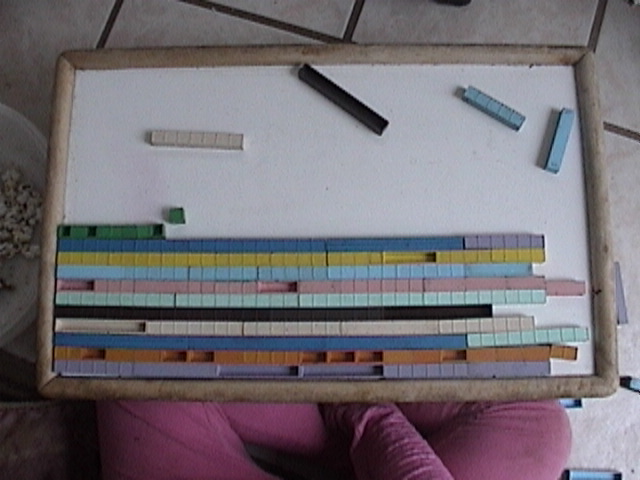 They don't all have to go "the right way" some are sideways some are upside down (we didn't talk about negatives at all), and it made it easier to count the twos especially because you don't lose your place bacause they don't all look the same. We HEARD some very distinct patterns when counting by 5's and discovered some easy rules that she made up when counting by 2's...and she could see 6 is three twos and two threes, and six 6's are indeed the same as 36. We ate popcorn and slurped some vitamin c juice. This is math. 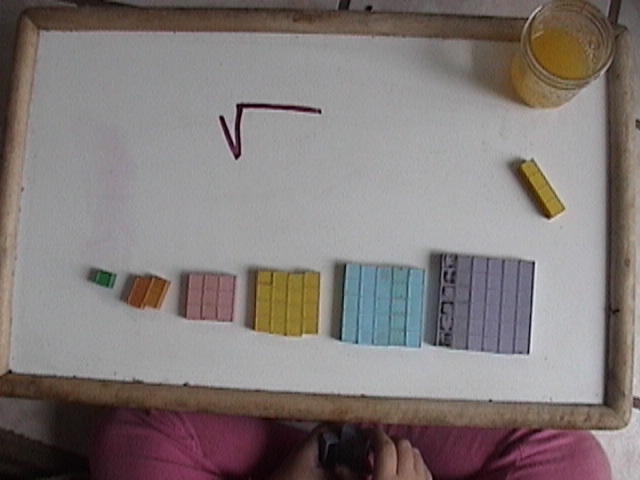 Then we cleaned up a little and made squares. I cannot tell you how important it is to build squares especially after working with teen agers in geometry, trig and pre-calc. So many problems could be avoided if they had some experience with squares. Here we learned about the square root symbol and what it means...make a square and count one side. 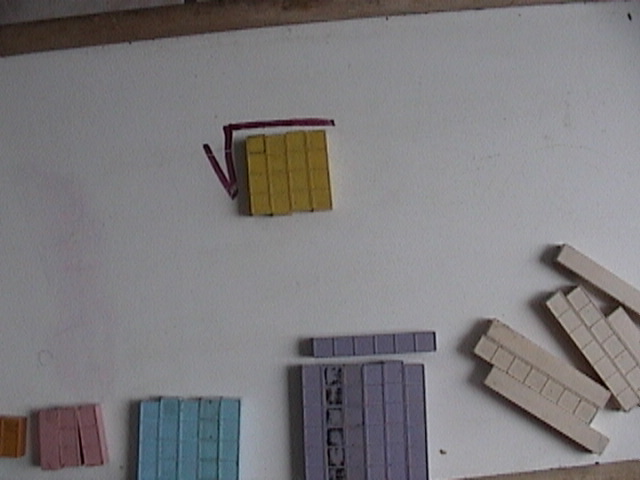 That little hook thingy on the side says count the one side. Note the beautiful blend of blocks and symbols to bring the point home...we put all the squares under the square root sign and counted one side...we also spent some time counting the whole square which for a ten year old takes a little work...especially the seven square. But counting the side was super easy peezy chicken squeezy. This is math. Why does it have to be hard?

This along with using both hands uses both sides of the brain. "This" meaning blending blocks and symbols, the blocks very much right brain, that square root symbol decoded by the left brain if there are such things. I prefer whole brain and one side doing a bit more work than the other although we can see now with science and machines the exact areas that "light up" when certain tasks are presented to it. I am very interested in nuero feedback and will be perusing that angle a little more in the coming months because I just don't have enough to do already. 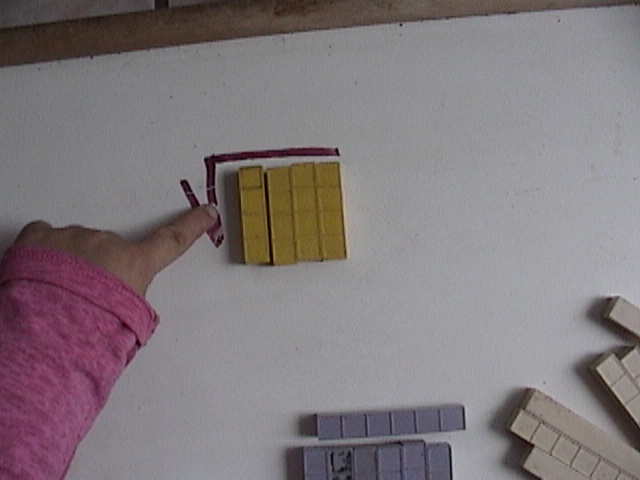 Sixteen was pretty easy to count, and counting one side was a cinch. We talked about squares and the name of that symbol and what it means several times, it will take many more impressions before she "knows" these concepts and can "see" the square root of 16 without needing the blocks (or even the symbols). 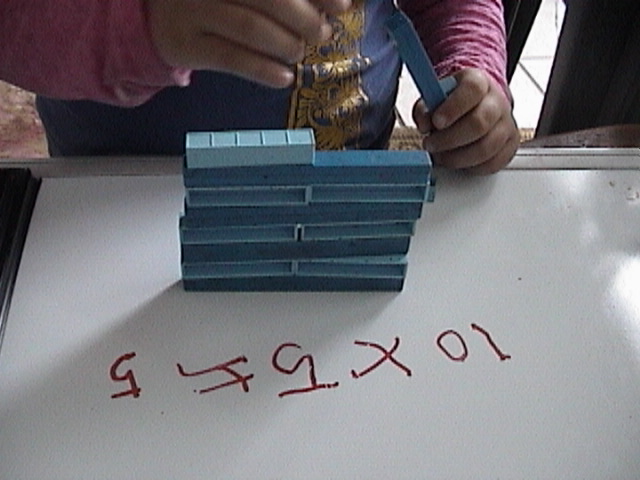 Then we cleaned up and played with fives. here you she she is writing out that 10 fives is the same as 5 tens. Quite obvious. Each of the tens has two fives on it so it was easy to count fives by two and every time we did that was another ten...so 3 dark blue bars is 30 and that's 6 fives...so we are counting by fives and counting fives by twos...pretty sneaking of me. 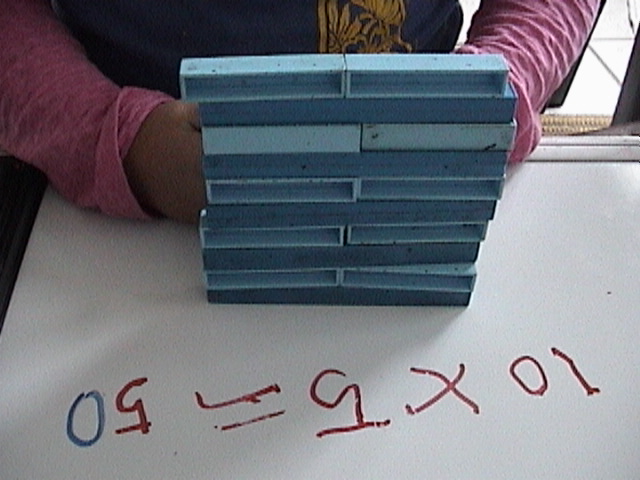 And there she writes 5 tens or 50...I told her she was right it was 5 but she needed to tell me what kind too...so she popped the zero on there. 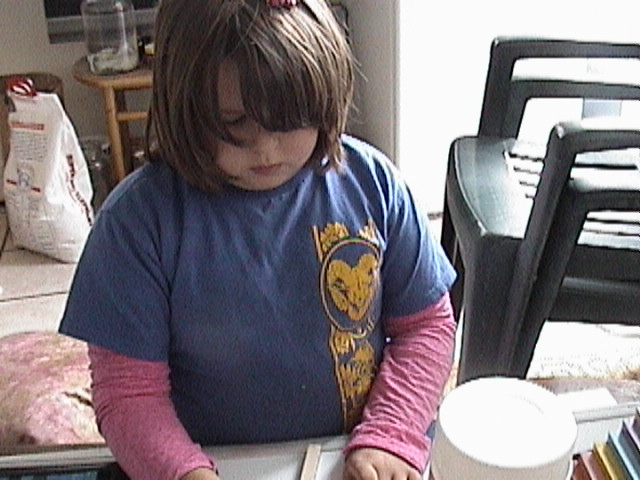 Note she uses both hands often times while building blocks. This is important for whole brain learning too...engage all the senses, including smell and taste. The popcorn adds a favorable relationship to math...simple. Pavlov can explain it to you if you don't already get it. Encourage your students to use BOTH hands at the same time if at all possible.

Not shown was a fun game of what's under the cup as a reward for doing a lot of math and being good. The reward for doing math is of course more math...at Crewton Ramone's house of math this only makes sense.

One thing I want you to take note of is counting forward not backward. Lets say we have 13 and there is a 7 showing which means there is 6 under the cup. You train the child to compare the 7 with the ten and see it needs 3 more...plus the 3: means it must be 6 under the cup for some students I may even put two threes...they don't take seven and subtract it from 13...

Find us on face book.

I forgot to mention this kid is supposed to be ADHD or ADD or something. We played math and only math for over an hour.

Posted by Crewton Ramone's Blog Of Math at 7:31 PM No comments: