Help Me Get Ranked.

If you have a blog or a website I'm happy to link to you, too.


People always ask if they can pin my pics of base ten blocks. YES.  Just give a link back to where you got the pic.  Kinda like I just did, there.  You click on the words "base ten blocks" and it takes you to Crewton Ramone's House of Math. The 'base ten blocks' part is called the "anchor text" and the "link" (where it goes when you click the anchor text) is

Replace the ( ) with <  > and you have the code you need to drop a link into your pages. Those with a little web experience know what I'm talking about. If not just send me an email and we'll figure it out. This will also help me rank with search engines for the term "base ten blocks". Right now I am no where near page one and the pages that are, are not as relevant as my site if I do say so myself. lol  Think back to how you found me in the first place if it wasn't a super excited friend, it was probably you searching for something to do with homeschool math on the internet. This will help others find me too...again people ask how can I help spread the word. This is a good way but things as simple as hitting like or share or mentions in whatever social media you use helps quite a bit. Reall, every little it helps.

You can pull stuff off my website or this blog too if you have a blog or website that needs content, again just give a link back to where you got whatever it was from...to include text. EZ.

People also always ask me, what do you mean "just play with base ten blocks?" Just what I said.

This isn't rocket surgery: just play blocks when they are little kids (roughly 8 and under but even teenagers can have fun and learn math just playing with blocks but then it moves to a reward and free time, with the little kids especially 5 and under it's pretty much ALL free time and sing songs ). And DON'T over do it by asking ALL of the questions listed 'at once' or in the same session...they should be "natural" questions. You may also take note of the child or student as they are building; they may say something like, "I need 4 fives...two for each of the smaller ships." For little kids that's 4 divided by 2...and BTW how much is four fives? 5x4.

You could sing songs...whisper count, just skip count...whatever. Keep it simple and fun.

Hey how many three's is that on the super duper laser cannon turret? . And what shape is that? Square.

A fast lesson square root should be obvious and natural.

If you make a cube out of 3's how many units would be in it? 27. Hey look instead of writing 3x3x3 we could write 3³--that's called economy of symbol.


You can also see a calc lesson had gone on before this where we learned about doughnut factories and water tanks.

A lesson on square roots of numbers like 2 and 3 can be seen at the nose of the big ship where we wrote out quite a few places. It's all math. 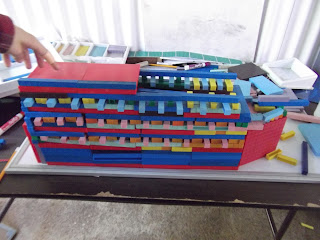 Here was a fun response to build me something.  This is the hull of a pirate ship...with cannons and everything.
This came from Kirk's Tutoring, who also uses this method.   I assume the student was given free time but gee, seems a lot of questions could be asked about his too...also note the symmetry and the observations that could be made here, and they could even just start with what the word "symmetry" means. Which is a very complex concept for the 6 and under crowd but there it is shown clearly. 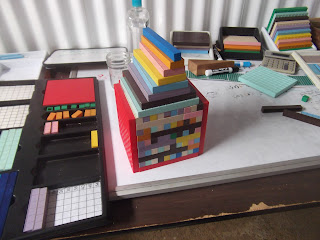 The work here was building a cube of hundreds made out of addends for 10. Then the kid "splendified"  it by adding some hundred squares and the pyramid of multi tens on top. 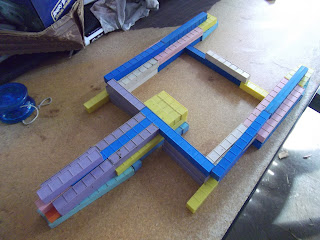 This is a freighter with huge engines so it can get cargo from planet to planet FAST. 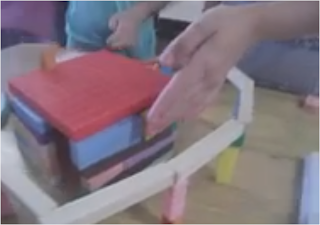 He called Mortensen More Than Math for a reason. Imagination, fine motor skills AND math are developed by playing with these blocks. This page was to give you ideas...NOT BLUEPRINTS.

These need to be turned into little booklets with instructions on how to build them (kinda like those booklets you get with Lego kits) and some observations that can be made while doing so...

The problem I have with doing books like this is that some of you (not all of you) will ONLY build the ones you see in the books ONLY ask the questions I list etc. You have to play and be creative; these are just examples , a vague framework from which you can get ideas and then allow your kids to be creative...and build whatever they want. As they build talk about what they did. Use some symbols to show we can use numbers to "talk" about what they did (express reality numerically). And using mathematical symbols is a WHOLE lot faster than English or whatever language other than mathematics you speak. 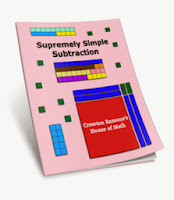 Get  a FREE book to help you get started exploring and discovering the wondrous world of mathematics as presented via base ten blocks.  Just click this link to get Supremely Simple Subtraction delivered directly into your inbox.

Posted by Crewton Ramone's Blog Of Math at 1:37 PM 3 comments: Take 18 for example, 3x3x2 covers all the bases. 2x9, 3x6 same thing, 18.  Just depends on how you multiply the factors.  I use algebra to teach all manner of math concepts. Not only that, you teach more faster because you can compound the lessons.

What you aren’t seeing is the base ten blocks and drawings we used to make this EASY.  So here they are.  My notes for the days class. This was just over an hour's worth of work. But these two are aces. This was FUN for them. Might take you more or less time depending on all manner of factors. (Get it? I crack myself up.)

Started off with the difference of two cubes and they very quickly saw some patterns there...
I leave x³ - 64 for you the reader to do on your own time...might want to start at x³ - 1 with basic ops pieces and work your way up...drawing as you go. Click here for more third power algebra. 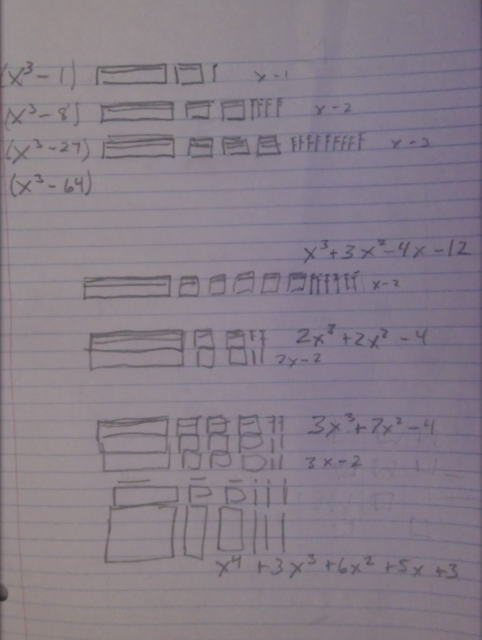 We did a few more problems not shown here but they were variations on the drawings you do see.  If these drawings make no sense to you or you are new here go explore over at my house of math.

The other student was 11. But as he says, "once you get to 10, nobody is impressed you can do algebra."  I'm pretty sure there are still plenty of people who are impressed when all you see is symbols...but what these kids do is see the symbols and translate them into geometric figures that can be easily counted and manipulated in their heads or if need be with the aid of sketches on paper.

They have been factoring polynomials since they were little, just like these two.

Algebra is important. It is the greatest labor saving device ever devised by the mind of man and yet it is currently the most failed subject out there. If you work in retail or fast food, you won't need the algebra much unless you get into top management.  But if you are in the sciences or engineering or architecture you will use algebra EVERYDAY. How do I know? Because when ever I am around engineers or scientists or architects I ask them, "how often do you use the algebra?" And the answer is always: "EVERYDAY."

Little girls can do this just as easily as little boys by the way:


Third (and 4th) power algebra, negative expressions, integers and more are covered in depth on the advanced algebra page. You'll need a password though.

The lessons go like this...I give them the symbols for example x³ - 27 and they have to give me the drawings or just give me the factors...this is exceptionally effective for teaching much more than just factoring polynomials, it can also be used to teach remedial math.

If "advanced algebra" for your 8 year old is too much for you maybe you could start with subtraction...here is a FREE SUBTRACTION BOOK to get you started, soon stuff like you see here will be child's play.