I now have a seven year old doing algebra...without fear or tears. At the end of this post you'll find a link to a page where children as young as 4 and 5 are taught math with algebra. 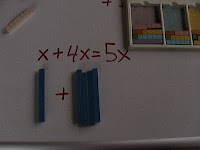 This often throws a lot of kids off.

Here it's obvious. The questions that come up for "regular" algebra teachers rarely come up at all because it's visually obvious that "x" means "one x" and you don't need to write 1x because it's redundant. This quick lesson saves a lot of pain later. Now what if each x is 2? Or 5? Easy. X can be anything. 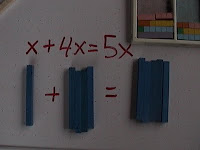 By now, it's getting to the "no big deal" stage. Take a look at the problems below; he did them one by one...and approached them with supreme confidence that he could do it. In fact, it was basically a game of solving the puzzles I made. 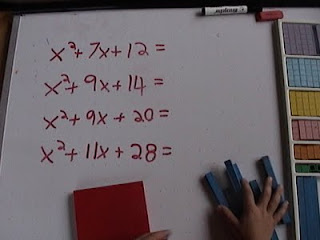 We certainly didn't start here; but hour after hour--little by little--each concept compounds and we are now at the point where I just write the symbols and he does the rest. Note: I am teaching him much more than factoring. He is still learning addition facts and multiplication facts AT THE SAME TIME he is learning to factor polynomials. He took more than half an hour to do these four problems, and he had to do a lot of math to solve them.

Expect lots of trial and error; he learned several ways that didn't work for these problems but gained information that will come in handy later.

Take the third expression for example:

He discovered several ways to break up 9, before he got to 4 and 5.

we also discussed the economy counting disguised as "fewest pieces possible" so we used four 5's instead of five 4's which is still a little amazing to a 7 year old. He figured out right away that two 10's wouldn't work.

At the end he was much more impressed that he could make 8's by drawing figure 8"s instead of by drawing two circles... 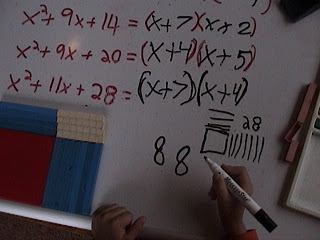 ...than the fact that he had factored x2 + 11x + 28! I know 17 year olds who run away in fear when confronted with these kinds of problems, and college graduates who can't remember how to do this...but they paid for the credits anyway.

He also drew a picture of each problem. Drawing is crucial for understanding why we use symbols. It brings the point home that the symbols are faster and that the mathematics expresses reality numerically. He won't soon forget because he knows what the symbols mean and what they look like. The hardest part was counting out 28...what to use? 9's? 8's?...ah hah! 7's.

In the process he figured out some multiplication facts for 8's and 9's...on his way to discovering he needed four 7's...he also made comments like, "this number isn't square...if we had 12x we could make a square number..."

Here is a Polynomial PDF to practice all 45 addends and many multiplication facts too.

Most importantly, we had fun the whole time. Since he stayed on task the whole time and since we did a lot of math very quickly, he got some free time to draw. He was much more impressed with his ability to make 8's and 2's than his ability to factor the trinomial! And the pirate ship came out pretty cool too. 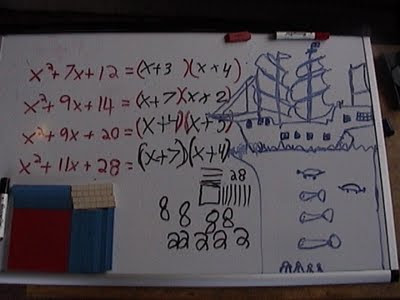 Here is a post with lots of video showing ALGEBRA with toddlers.

Posted by Crewton Ramone's Blog Of Math at 8:08 AM