Why English is hard to learn (you've seen this email):

The bandage was wound around the wound.

The farm was used to produce produce.

The dump was so full that it had to refuse more refuse.

We must polish the Polish furniture.

He could lead if he would get the lead out.

The soldier decided to desert his dessert in the desert..

A bass was painted on the head of the bass drum.

When shot at, the dove dove into the bushes.

I did not object to the object.

The insurance was invalid for the invalid. 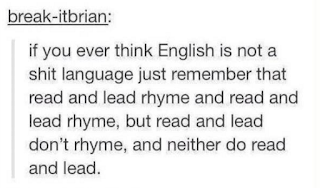 Since there is no time like the present, he thought it was time to present the present.

There was a row among the oarsmen about how to row.

They were too close to the door to close it.

The buck does funny things when the does are present.

A seamstress and a sewer fell down into a sewer line.

To help with planting, the farmer taught his sow to sow.

The wind was too strong to wind the sail.

After a number of injections my jaw got number.

Upon seeing the tear in the painting I shed a tear.

I had to subject the subject to a series of tests.

How can I intimate this to my most intimate friend?

You can listen to the sentences
or download the files in .mp3 or .wma (Windows Media) format.


Let's face it - English is a crazy language.

* There is no egg in eggplant nor ham in hamburger; neither apple nor pine in pineapple.
* English muffins weren't invented in England or French fries in France.
* Sweetmeats are candies while sweetbreads, which aren't sweet, are meat.

We take English for granted. But if we explore its paradoxes, we find that 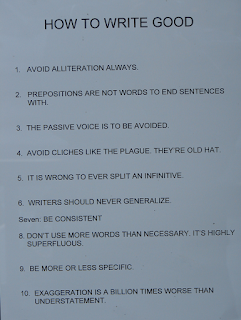 *
quicksand can work slowly,
*
boxing rings are square and
*
a guinea pig is neither from Guinea nor is it a pig.
*
And why is it that writers write but fingers don't fing,
*
grocers don't groce
*
and hammers don't ham?
*
If the plural of tooth is teeth, why isn't the plural of booth beeth?
*
One goose, 2 geese. So one moose, 2 meese? One index, 2 indices?
*
Doesn't it seem crazy that you can make amends but not one amend, that you comb through annals of history but not a single annal?
*
If you have a bunch of odds and ends and get rid of all but one of them, what do you call it?
*
If teachers taught, why didn't preachers praught?
*
If a vegetarian eats vegetables, what does a humanitarian eat?

Sometimes I think all the English speakers should be committed to an asylum for the verbally insane.

*
In what language do people recite at a play and play at a recital?
*
Ship by truck and send cargo by ship?
*
Have noses that run and feet that smell?
*
How can a slim chance and a fat chance be the same, while a wise man and a wise guy are opposites?
*
How can overlook and oversee be opposites, while quite a lot and quite a few are alike?
*
How can the weather be hot as hell one day and cold as hell another?
*
Have you noticed that we talk about certain things only when they are absent?
*
Have you ever seen a horseful carriage or a strapful gown? Met a sung hero or experienced requited love?
*
Have you ever run into someone who was combobulated, gruntled, ruly or peccable?
*
And where are all those people who ARE spring chickens or who would ACTUALLY hurt a fly?

* your house can burn up as it burns down,
* in which you fill in a form by filling it out and
* in which an alarm goes off by going on.

English was invented by people, not computers, and it reflects
the creativity of the human race
(which, of course, isn't a race at all).

The was not written by Crewton Ramone it was cut and pasted from an email I have gotten more than once. I'm pretty sure (not beautifully sure) it was one of those emails that got longer the more it was sent around if it was written by one person that person never got credit because his or her name was left off the email...by the way sorry and apologize NOT same if you think they are go to a funeral and instead of saying sorry say I apologize...

Dearest creature in creation,
Study English pronunciation.
I will teach you in my verse
Sounds like corpse, corps, horse, and worse.
I will keep you, Suzy, busy,
Make your head with heat grow dizzy.
Tear in eye, your dress will tear.
So shall I! Oh hear my prayer.
Just compare heart, beard, and heard,
Dies and diet, lord and word,
Sword and sward, retain and Britain.
(Mind the latter, how it’s written.)
Now I surely will not plague you
With such words as plaque and ague.
But be careful how you speak:
Say break and steak, but bleak and streak;
Cloven, oven, how and low,
Script, receipt, show, poem, and toe.
Hear me say, devoid of trickery,
Daughter, laughter, and Terpsichore,
Typhoid, measles, topsails, aisles,
Exiles, similes, and reviles;
Scholar, vicar, and cigar,
Solar, mica, war and far;
One, anemone, Balmoral,
Kitchen, lichen, laundry, laurel;
Gertrude, German, wind and mind,
Scene, Melpomene, mankind.
Billet does not rhyme with ballet,
Bouquet, wallet, mallet, chalet.
Blood and flood are not like food, 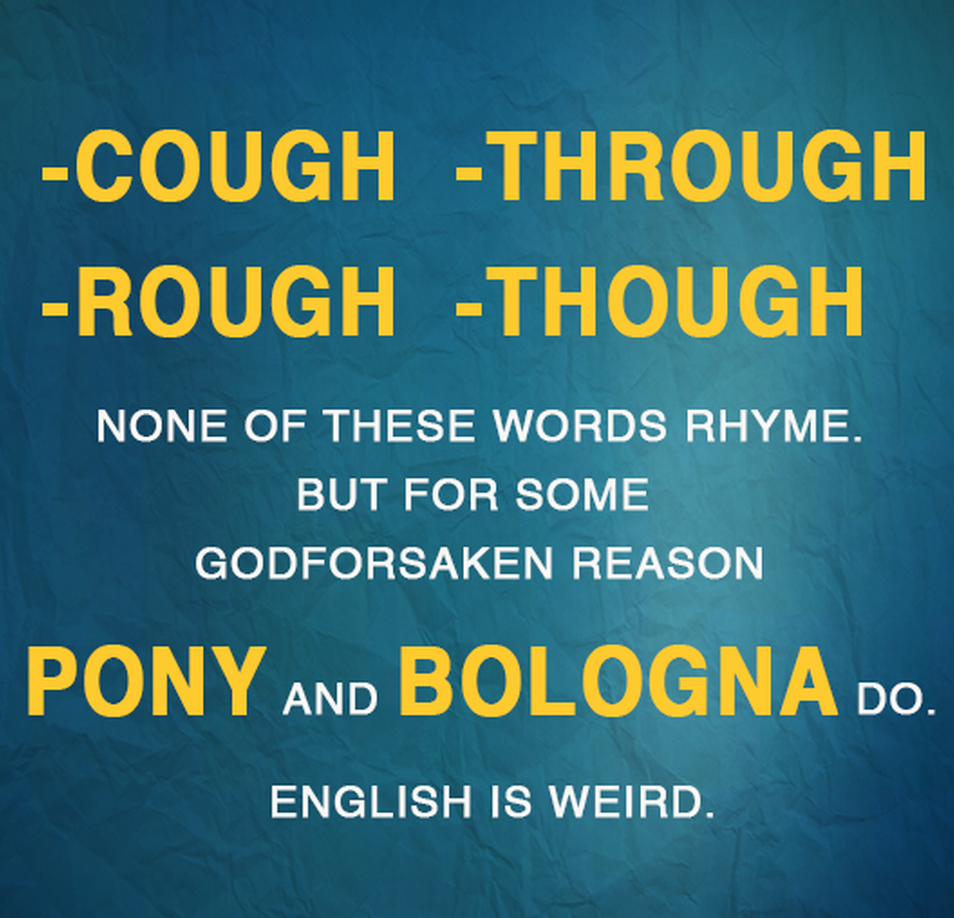 Nor is mould like should and would.
Viscous, viscount, load and broad,
Toward, to forward, to reward.
And your pronunciation’s OK
When you correctly say croquet,
Rounded, wounded, grieve and sieve,
Friend and fiend, alive and live.
Ivy, privy, famous; clamour
And enamour rhyme with hammer.
River, rival, tomb, bomb, comb,
Doll and roll and some and home.
Stranger does not rhyme with anger,
Neither does devour with clangour.
Souls but foul, haunt but aunt,
Font, front, wont, want, grand, and grant,
Shoes, goes, does. Now first say finger,
And then singer, ginger, linger,
Real, zeal, mauve, gauze, gouge and gauge,
Marriage, foliage, mirage, and age.
Query does not rhyme with very,
Nor does fury sound like bury.
Dost, lost, post and doth, cloth, loth.
Job, nob, bosom, transom, oath.
Though the differences seem little,
We say actual but victual.
Refer does not rhyme with deafer.
Foeffer does, and zephyr, heifer.
Mint, pint, senate and sedate;
Dull, bull, and George ate late.
Scenic, Arabic, Pacific,
Science, conscience, scientific.
Liberty, library, heave and heaven,
Rachel, ache, moustache, eleven.
We say hallowed, but allowed,
People, leopard, towed, but vowed.
Mark the differences, moreover,
Between mover, cover, clover;
Leeches, breeches, wise, precise,
Chalice, but police and lice;
Camel, constable, unstable,
Principle, disciple, label.
Petal, panel, and canal,
Wait, surprise, plait, promise, pal.
Worm and storm, chaise, chaos, chair,
Senator, spectator, mayor.
Tour, but our and succour, four.
Gas, alas, and Arkansas.
Sea, idea, Korea, area,
Psalm, Maria, but malaria.
Youth, south, southern, cleanse and clean.
Doctrine, turpentine, marine.
Compare alien with Italian,
Dandelion and battalion.
Sally with ally, yea, ye,
Eye, I, ay, aye, whey, and key.
Say aver, but ever, fever,
Neither, leisure, skein, deceiver.
Heron, granary, canary.
Crevice and device and aerie.
Face, but preface, not efface.
Phlegm, phlegmatic, ass, glass, bass.
Large, but target, gin, give, verging,
Ought, out, joust and scour, scourging.
Ear, but earn and wear and tear
Do not rhyme with here but ere.
Seven is right, but so is even,
Hyphen, roughen, nephew Stephen,
Monkey, donkey, Turk and jerk,
Ask, grasp, wasp, and cork and work.
Pronunciation (think of Psyche!)
Is a paling stout and spikey?
Won’t it make you lose your wits,
Writing groats and saying grits?
It’s a dark abyss or tunnel:
Strewn with stones, stowed, solace, gunwale,
Islington and Isle of Wight,
Housewife, verdict and indict.
Finally, which rhymes with enough,
Though, through, plough, or dough, or cough?
Hiccough has the sound of cup.
My advice is to give up!!!


Posted by Crewton Ramone's Blog Of Math at 7:11 PM