Crewton Ramone Using Base Ten Blocks In The Classroom.

Here is a second post about how easy it is to incorporate base ten blocks into your classroom situation. Here is the other post I did called Crewton Ramone In the Classroom.

I've gotten into contentious debates about whether little kids can do math like this. What is so hard about it? They use their ability to discover SAME on both sides to discover x and then they have to do some more thinking to discover what the number is that is disguised on either side. You start off easy and work your way up...in both of the cases I cover here some students got the answers instantly.

You can hear one little girl in the class throughout that vid. She has been given lots of labels, I wanted her to stay in the class even though she is disruptive because like all the other kids given the chance she proves to be pretty good at math and this is valuable at repairing her damaged self esteem. Anyhow, there is a myth that employing base ten blocks will cause mayhem in the classroom. This doesn't have to be the case as seen here:

I will be the first to admit that it CAN get loud and out of control if you let it. Here some of the class is gone because they have remedial reading, but groups of four per combo kit works well and there could easily have been all 24 of them. I never really got any of the lessons on Pythagorean theorem I did on vid but factoring, fractions and percents are all easy to do with manipulatives. Here is an additional page on how to teach addition. (Get it additional!! C'mon--that's funny right there.) You could spend quite a bit of time there if you follow all the links on that page.

At the same time you introduce those concepts you play and build addends learn about integers and subtraction and practice multiplication so they can see the whole picture not just tiny compartmentalized parts. 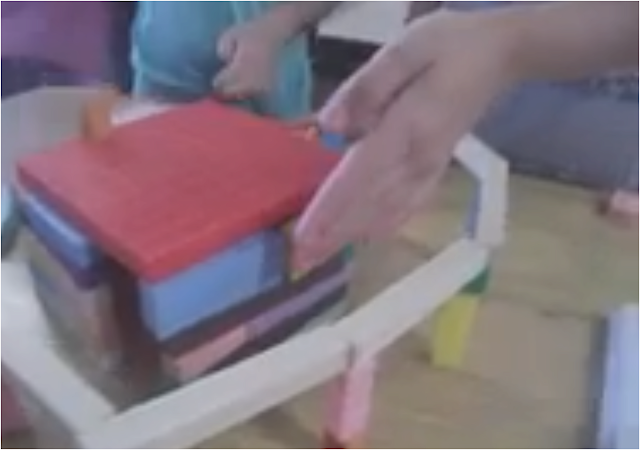 This one shows them being creative, developing their fine motor skills and more. They not only built addends they had to work at getting the sevens fence to work using the posts...which are addends for 5...younger students would have a hard time making that fence work...these activities are great for preschool thru 3rd grade although older kids like to play too and some who never mastered their addends could also benefit.

Building and playing gives them a positive math experience.

They are in second grade. It shouldn't be work. It should be fun. These kids looked forward to Mondays with Crewton Ramone. They go home and tell their parents about what they did and the parents are amazed at their little second graders explaining factoring or Pythagorean theorem to them, I was at a birthday party and basically got mobbed by the parents there who were amazed that I was the math guy. They thanked me for teaching their kids math beyond adding and subtracting which is about the extent of the accepted 2nd grade curriculum... Adding subtracting a little measurement money and time telling.

This one can get out of hand because if they aren't careful the towers crash and there is a lot of excitement. Note that the point is to build addends NOT to build towers. I have seen teachers have them build using all the same blocks instead of the combinations...which defeats the purpose. Also you can count each level by the 4 or five blocks they used to get some skip counting in...in other words count the all the 7's on the 7 level...7, 14, 21, 28, 35...all the nines on the nines level etc just to get the patterns for the first few in. 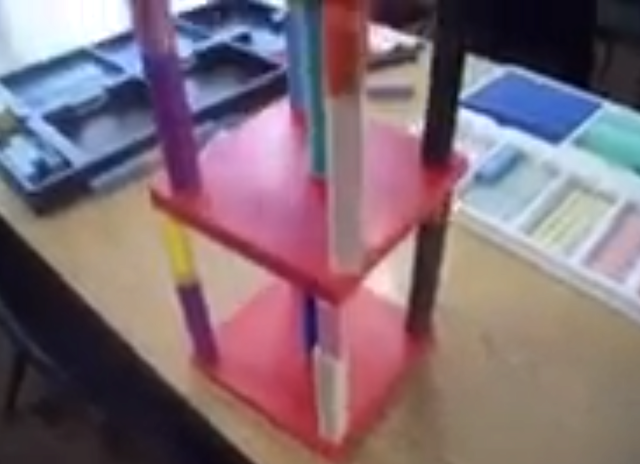 For older kids (third or fourth graders) I make them build it and then tell me how many units they used...they have to do a lot of counting. That means count every block...including the hundreds...so lessee that's 100 plus 5 tens, plus another 100 plus 6 nines plus another hundred etc...some kids count all the hundreds then the pillars...no matter how they do t it's a great exercise in addition and multiplication.

Here is another fun exercise making a cube (it takes two top trays however) and I didn't make this vid in the classroom but at home with three home schoolers but there's nothing stopping you from doing in the classroom if you have the blocks. I did this with the first graders but never got it on vid. I made them line up and each kid built a combination and they went around and around their tables as fast as they could trying to build theirs faster than the other teams. A teacher could help keep the blocks straight and from falling down as it gets ten high. When you are done you can talk about cubes and notation if you want.

All in all it's EASY to use blocks in the classroom. You will find that just by playing they learn their addends and a lot more all on their own. Some direction from you can help but it's more fun and effective than worksheets and book work, the students learn more faster and you will earn a reputation as a good teacher and a fun teacher that students look forward to coming to rather than not.

Here is a page at the house of math that has a little more about using base ten blocks in the classroom and an instructional video with a million dollar idea in it...it basically links back to this blog post and the other one but it also contains a little more info and a couple of other vids to help you.

Posted by Crewton Ramone's Blog Of Math at 5:09 PM