Here are a few Screenshots and vids from some of the Online Math Tutoring I do.

I have found that online math tutoring is fun and the parents have found it is effective. All you need is a set of blocks. 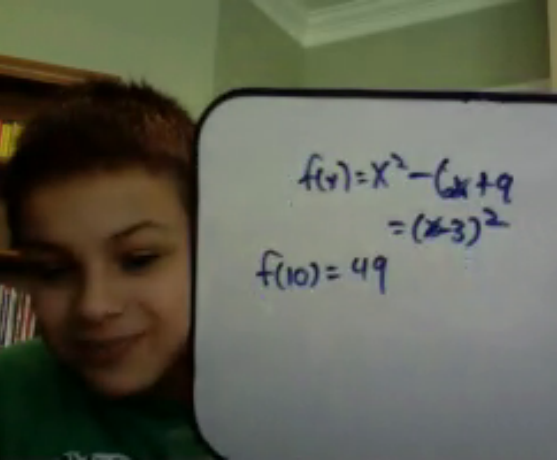 Here is a 12 year old doing some high school math where we are exploring the concept of f(x) and what it means to evaluate algebraic expressions for various values of x. Sound complicated but his 8 year old brother gets it too. We do algebra because it teaches and reinforces basic operations, because of the algebra we have to do addition and subtraction multiplication and division. Their basic skills have improved since I've met them but we rarely drill multiplication facts...

This is one of my favorite students. She is a handful but she she is a free spirit, undisciplined and I dare say a bit naughty at times. But she has a creative mind that needs to be nurtured and rewarded, cultivated not punished for thinking differently and finding the structure of math a little boring. My job is to make computation easy and fun so that later she can "do math" which she will find is far more than computation. Computation is how we do math, but math involves problem solving logic and reasoning. 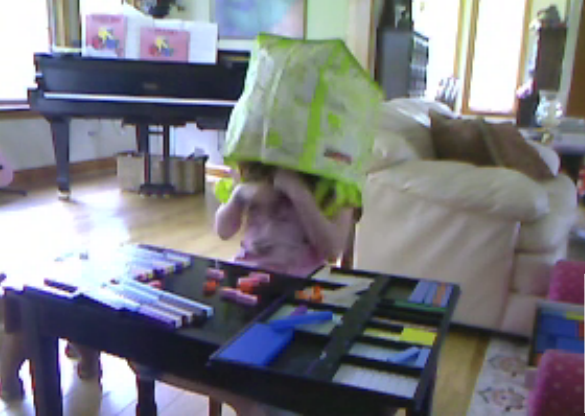 She is having fun learning addends...I had one parent ask me, "why not just cover the blocks why do you have to put a bag on their head?"
"Because it's more fun." 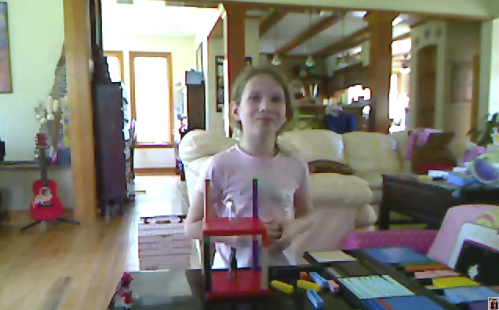 Building a tower is fun whether you are a boy or a girl. Here we are building the addends for 9 thru 6.  This child is eight. A pox on teachers who think math time can't be play time. She often goes through and tells me all the combinations she has made, although she doesn't have to. Her subconscious also develops a memory for the addends and this makes recall instantaneous.  She doen't have to think or compute...6+3 is the same as 9. We've built it many times. I should have taken pictures of the many times the tower fell over and needed rebuilding...which is also fun. Online Math Video Tutoring is pretty cool. We are as far apart as we can be almost...from Hawaii to the east coast. With the net distance doesn't matter. 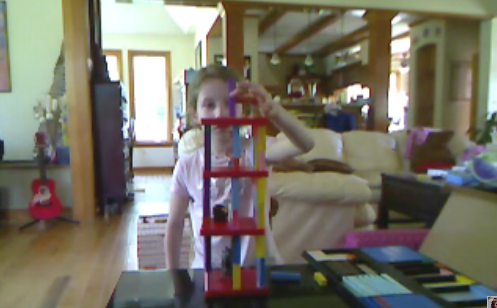 After you get them built try playing Jenga with them...take out a block or two without knocking it down. Why? Because it's FUN. 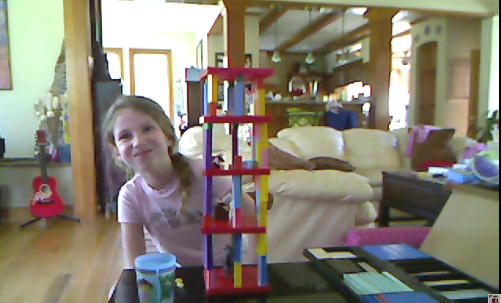 I believe this photo captures a thing called pride. "I did this."  Good for self esteem.  Good for making math fun and giving a positive association with math instead of a negative one. 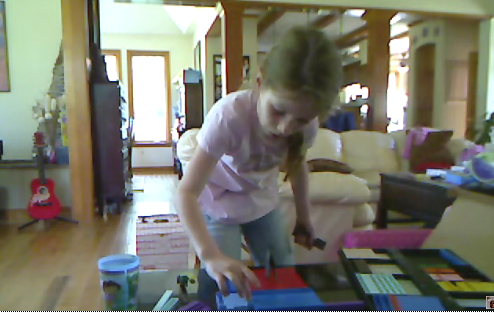 I find algebra much more useful for teaching math, building towers is fun but so is making these rectangles factoring quadratics not a problem...here she is completing the square and factoring x² + 10x + 25...she gets multiplication, addends, division and algebra all in one lesson. With the towers you get addition and subtraction of addends and fine motor skills but that's about it. Algebra is a much more powerful and effective way to teach more math all at once.

It still amazes me traditional teaching separates the inverse functions of addition and subtraction and multiplication and division. You can see the relationships when you play with the blocks. 6+3 = 3+6 and 9 is made up of a 6 and a 3 in this case so if you make a 9 with a 6 you need three and they see that 9 - 6 is 3 and 9 - 3 is 6...all in one shot where on paper it would take a but to list all those facts. Manipulatives make some operations MUCH faster and easier but eventually you will see paper and pencil really is the much faster way to do math. With Online Math Video Tutoring I can teach anywhere on earth, the concept should still boggle the mind. ANY subject can be taught this way including eye surgery as it turns out but, "dammit Jim I'm a mathematician not a doctor..."

Even when google's vid feed is messed up you can still do a lesson...and algebra is easy even being green. You may also note that I'm pretty generous with what constitutes "one hour" if we are having fun and they don't notice one hour can be 105 minutes...lol...sometimes it's a little less sometimes it more sometimes it really 60 minutes. I stress again with your kids math time shouldn't be rigid but more flexible and the lines between math time and play time should blur and merge.

Posted by Crewton Ramone's Blog Of Math at 12:51 PM