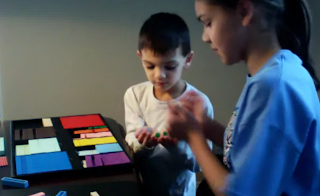 Base ten blocks are very effective at teaching math so effective kids can teach each other. Not only are they effective they make math fun. They even make algebra fun.  This lesson was lots of fun and lasted an hour, we built 25 addends in the tray, we played what's under the cup did a little skip counting and generally had a gay ol' time.

It used to be called Mortensen MORE THAN Math for very good reason. Here a little brother is helped out by his big sister. I can't think of anything more beautiful than siblings learning from each other...unless it's parents learning math from their kids and vise versa. This little boy has two older brothers too, one of whom was supposed to have class with me but we ran out of time and he asked if he could take his brother's place. He is the youngest and only 5 so he was a little shy, so his big sister came in for moral support. She was by coincidence doing her math from school while she watched/helped us.

She has had quite a few lessons with me and now her school work is easy and she's getting A's. When she get's to "harder" algebra she will still get A's. As you know the most common grade for algebra is F. Most students who take it FAIL. What does that do to a child's self esteem, particularly girls?  There are some child psychologists who have figured out that if they fix the math grade a lot of other family problems disappear.  Problem is most of them can't teach math any better than their clients teachers. Until now.

Why not avoid the problems in the first place?  Here is a system for teaching mathematics that makes it so easy even math phobics can learn how to do it. I have taught more than one mom who hated math to play math with her children.  Often that's the first hurdle...getting them to make math fun. This child's mom also works with him and spent a lot of time home schooling the other three...with a few supplemental lessons from me when it came to math. So playing math over the internet is natural to this little boy, although he was a little shy at first and wanted somebody to be there for security. Mom had to take his brother to swimming practice...so his sister was elected.  Here we see him playing what's under the cup with my little boys. Even though these games are far under the older children's skill level, having their addends reinforced this way doesn't hurt anything.

Repetition is the mother of skill, but this kind of repetition doesn't get boring or tedious because they are just playing with another kid...imagine if they had a worksheet with 50 of these problems, even if they were set up algebraically where they had to find x it would be drudgery or had to go through a deck of addition flashcards.

On top of that, the emotions and associations that go along with play are positive whereas the emotions and asscoiations that go along with drill work and work sheets are negative. You need only look in the mirror in most cases for confirmation of this. What asscociaitions do YOU have with math? Yes you reading this.  Chances are they are quite negative...and even if they are neutral you don't associate FUN or PLAY with MATH. There are a very few reading this that do... Why is that? And if you hate math as a teacher or a parent, do think that might maybe somehow perhaps transfer to you students or children.  People used to think they had bad math genes.

At this age even sorting the blocks is useful, I admonish parents NOT to clean up after their kids after a math lesson. Make them do it, or make them do MOST of it with your help. While you put away blocks you can count and do a little multiplication just so they hear the patterns...when they are very young you might just have them put same with same...at this age you can say things like 3 sevens is 21 and as you put fives away count them, five, ten, fifteen, twenty... This would also be a great time to put a skip count CD on or multiplication rock songs as music to clean up to. If you sing the clean up song by Barney while you do it, the ten bars will turn into snakes at night and disable your pets.  And now that song is stuck in your head again. You're welcome.

Learning is going on all the time...even during clean up. 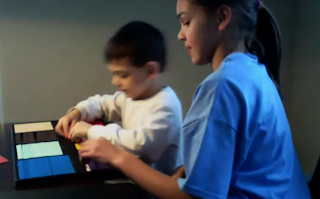 When you get right down to it, he doesn't really need me because his sister (who as I said has MANY lessons under her belt) and his mom who has spent some time on my blog and website,   plays with him too. His sister was actually a big help during this lesson.  Soon it can be just me an him as he get used to Crewton Ramone.

The video snippet below gives you a feel for what happened during an hour long session with a five year old who is learning his addends. I also put part of a game of what's under the cup on it which will get him ready for some simple algebraic problem solving...this is so important and yet it is rarely done in public schools across the country. You can certainly hear his enthusiasm.  The pictures alone should be enough to warm your heart. I know parents who wish their kids would play together but sometimes it's hard when the ages are far apart.

Once counting is mastered we can do all sorts of math, in this case it's addition using addends and of course we make a game of it and play math. What's under the cup is a kid favorite.

Soon he will see 8 + x = 15 instead of the cup...and it will make sense that x = 7...and when he sees some rules years from now in public school those will make sense too... you can find more on tmy blog and website.

You know how you're supposed to read to your kids? You should probably math to your kids too.

Meantime Dboyz are just fooling around playing and building stuff....they also were doing some factoring together, you can't see it well but they factored 2x² -3x - 9...and just had fun building towers and a "castle" out of addends. They are 7 and 9 so for them it's just play (if you ask them they are sure they didn't learn anything...there are lots of other kids for whom these activities would still be challenging learning exercises. Dboyz are reinforcing facts they already know without paper and pencil or  math worksheets.

Learn to use your base ten blocks.

Multitasking is no problem with all you are doing is directing play...

Posted by Crewton Ramone's Blog Of Math at 7:38 PM